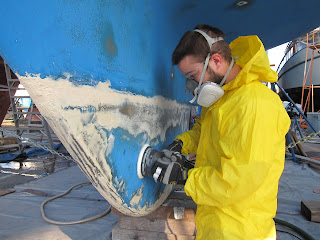 It finally felt like we were making good progress on the boat. The bottom paint was completed, the fresh water tanks were cleaned, and the the floor was put back in. We had been hopping from port to starboard with a two foot gap in the floor. The bilge was filled decomposing shower muck. For thirty years, the shower had drained into the bilge – dead skin cells, hair, and all. Rachel was kind enough to stick her head down there and shovel it out. I did the hoses for the head after all. 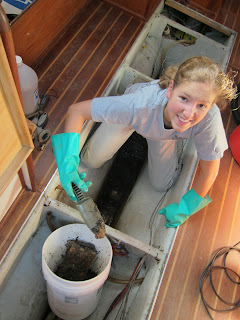 Yes, we were finally making progress. Almost finished it seemed. Then came the rain. Not a little bit of rain - but two weeks of rain. It almost set a record. The four windows in the main cabin were each leaking. The hatch in the main cabin was leaking. The two windows in the head - leaking. The forward cabin window - leaking. The v-birth was leaking from a badly sealed chain locker. All the spirit I had built up from completed projects was now dripping in cold Seattle rain. Literally, dark clouds hung above my head - and we can't live on a leaky boat.

We pulled out some sheets of plastic and covered everything up. Pulled the windows off and sent them in to get replacements. The replacements came back an eighth of an inch too small. We had to send them back, get a refund, and find a new vendor. Weeks went by with huge holes in the cabin covered with only a thin sheets of plastic. That's the way things go on a boat rebuild. 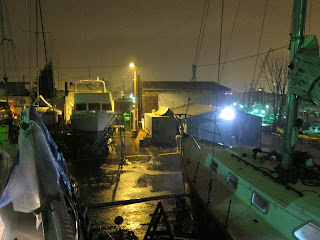 My new saying is that "nothing is done a boat until you do it twice." It's been proven itself true, time and time again. With it, I've learned to stopped expecting that things will be completed on the first attempt. It just doesn't happen that way - whether you expect it to or not.  Those expectations can lead to disappointment.

If there's one thing this boat has taught me, it is that the wind will not always blow where you wanted to go. You can fight it, resist it, or be upset by it - but the wind is going to keep doing what it does. Instead, of cursing the wind, trim your sails, take a few tacks, and soon you will arrive at your destination.